For years, the Union of Agricultural Cooperatives of Naxos has been actively involved with the Naxos Potato, which is the second most important product of the largest island of the Cyclades after the Naxos Graviera. In fact, in 2014, the Union created, with own funding amounting to € 450,000, a modern and certified Potato Packaging Unit. While, at the same time, it proceeded to the Certification of the Naxos Potato as a Product of Protected Geographical Indication (PGI). 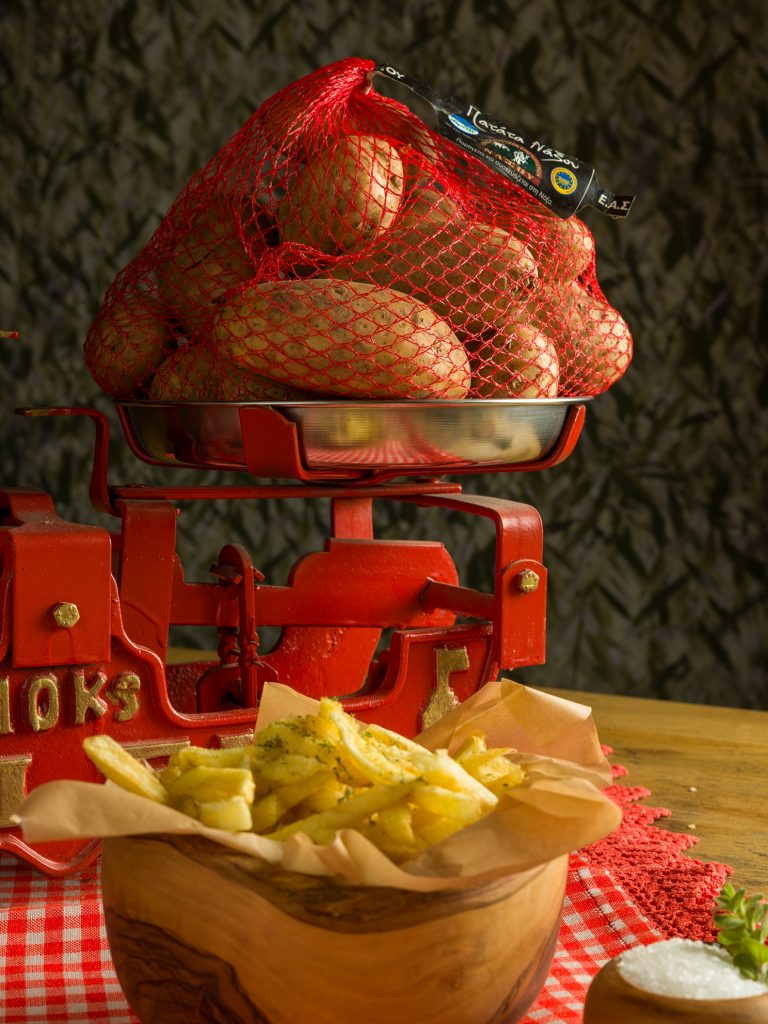 The Potato Packaging Unit of the Union is located behind the company’s headquarters (3rd Kilometer of Naxos-Chalkeiou provincial road, Loukaki location). It is certified with ISO 22000: 2005 and with GLOBAL G.A.P. Version 5. In fact, all the producers-members of the Union have the last-mentioned certification. The potatoes of the producers-members of the association arrive frequently at the packaging plant, and, after the necessary checks to remove the unsuitable tubers, they are standardized and stored in the refrigeration facilities. The potatoes are then packed in a 3 kg net or 25 kg bag and sold exclusively in large Supermarket chains. Each package is accompanied by the necessary markings, so that the traceability process is fully applied. That is, every consumer, in case of a problem, will be able to find out not only from which producer and from which plot the specific potatoes have come, but also all the interventions and cultivation care that were done from the moment of planting until the time of harvest.

In 1955, farmers in Naxos wanted to make their own cheese, as cow breeding was growing rapidly and the amount of milk produced was increasing. Thus they began to collect their milk, while at the same time the Union provided them with know-how. This is how the Naxos Graviera was created. A product that won the preference of the consumer public, as a result of which its production increased and the Union proceeded in 1996 to its certification as a product of Protected Designation of Origin (PDO).

Now, every year, the Union annually produces 1,200 tons of Naxos Graviera PDO. It produces its great cheese in its modern, certified cheese factory using milk exclusively from animals that live and are raised in Naxos. It also follows in all stages of the process the rules of traditional cheese-making, while avoiding the addition of powder, preservatives, antibiotics, dyes, condensate and milk concentrate. 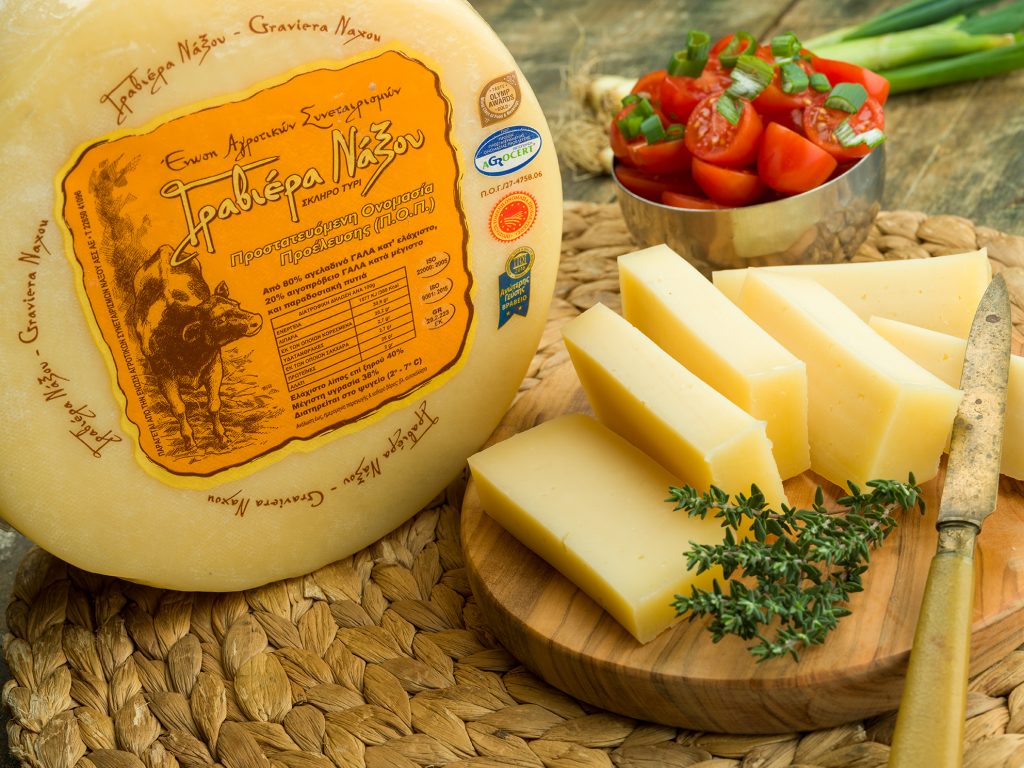 Graviera Naxos PDO is a hard cheese with a pale yellow color, thin, dry skin, solid elastic mass, small scattered holes, fine aroma, sweet, delicate taste and very characteristic aftertaste and for years has been recognized as one of the two most important products of the largest island of Cyclades (the other being the Naxos Potato PGI) and one of the top Greek cheeses, while it is ideal for all uses (for enjoying it accompanying meals or as a snack, for grating, for cooking “saganaki”, etc.). It is made from 80% cow’s milk (minimum percentage) and 20% goat’s and sheep’s milk (maximum percentage), with the addition of rennet. It is the only Greek Graviera based on cow’s milk that has been registered as a PDO product. It is also very rich in calcium, as 11 kilos of milk are used to produce one kilo of Graviera.
Finally, Graviera Naxos PDO of the Union of Naxos has won many awards, domestic and international. Some of them are the Gold Taste Award at the Greek Cheese Festival (2011), the Gold Award at the Taste Olymp Awards (2017, 2020) and the two (2) Stars at the Superior Taste Competition at the iTQi Institute in Brussels (2015, 2016, 2018). Available in bulks of nine (9), three (3) and one (1) kg, as well as in pieces (“wedges”) of 250 grams of fixed weight. 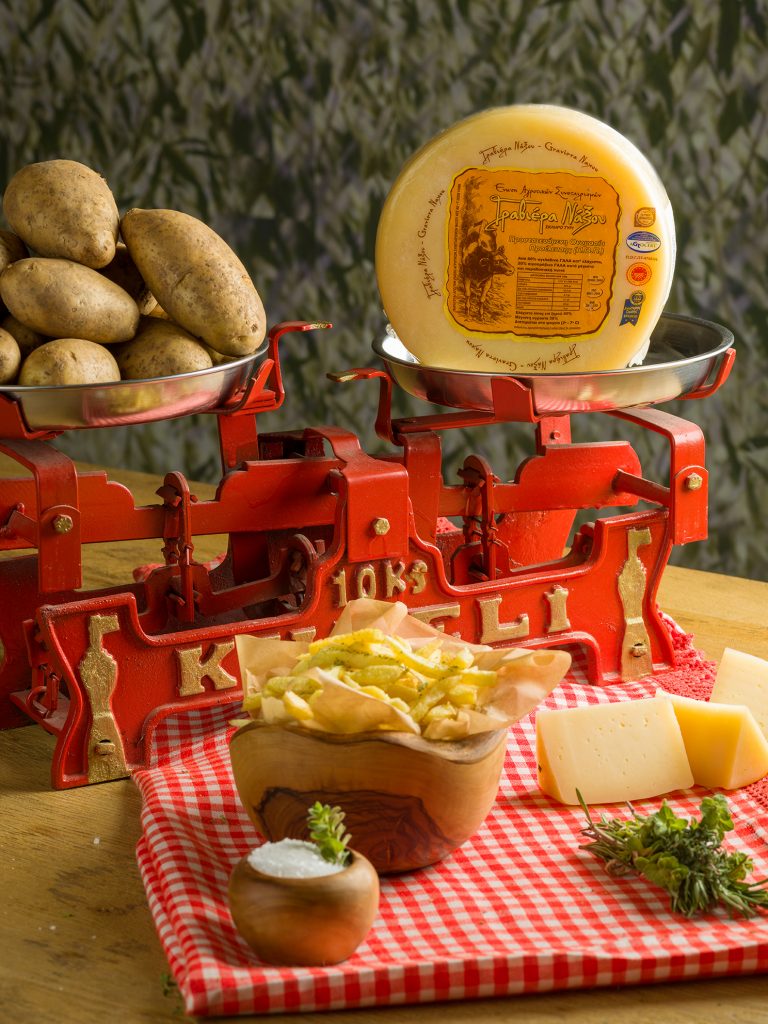